My family and I were a lot like Goldilocks on Saturday.  We tried three different restaurants before finding just the right fit.

Our intended destination was Swoon Bar.  It’s a pretty little place right on the main strip in Hudson.  We walked in and it was very hushed with jazz playing in the background.  The waitress was okay, not super friendly and to be honest, didn’t look super thrilled that we had a toddler with us.

Nothing on the menu really stood out to me, except for the prices.  Paninos (sandwiches) were the cheapest meal at 10.95 and all of the other main dishes were around 14.95 – 16.95.  It seemed a little steep.  I ordered the “Health Margarita” which had fresh grapefruit in it. The margarita was underwhelming.  J went with a dry white wine.  After studying the menu for a little while longer, I just couldn’t rouse any excitement about any of the dishes (J is of a different opinion on this).  So we decided to finish our drinks and try another spot.  $25 later we left. Yes that’s right, each of drinks was $12 (which we knew already but still, kind of shocking to be paying that before actually ingesting any actual food).

On we trucked to the next spot.  I also need to mention that my almost 18 month old daughter has decided she DETESTS the stroller.  The only thing she deems worthy of holding her is moi.  So I got a lot of exercise walking with an additional 25 lbs on me.

We headed over to Red Dot.  Initially we were excited about this place, they have a pretty garden out back with seating.  We were able to grab a seat out back.  The menu is however is another story – very basic, nothing exciting, a tad cheaper than Swoon.  I was going to get a salad and a potato latke, and J was going to get a Caesar Salad with Shrimp but then the only server for the outside area came over and told us that the kitchen was backed up and he couldn’t even take our order for several minutes.  With Future Foodie already being restless and trying to eat the rocks in the garden, we decided to try out luck somewhere else.  So left our second restaurant for the day. I have to say though, every one including the hosts/managers/and servers were very nice and were sorry that we were leaving and tried to get us to stay. 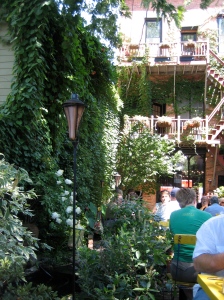 At last, we were in front of Baba Louie’s, which we were hoping was going to be our last food destination for the day.  Turns out, we should have just headed here in the first place because it literally was the perfect fit for our family.  We were sat in a corner, and the waitress was just so great.  She was super friendly to our daughter and someone else brought crayons and coloring paper for her and a little snack of dried cranberries for her (that was a first!).  The prices looked just right.  Baba Louie’s is famous for its pizza but stupid me didn’t order any.  J did though, and he made the right choice.

We started off with the Greek Salad.  The salad is not a traditional greek salad, it has roasted pumpkin seeds, roasted red peppers, kalamata olives, feta cheese, and a lemon herb dressing.  Sometimes it’s hard to get excited about salad but this salad elicited proclamations of deliciousness from the first to last bite.  All of the flavors worked well together and it was absolutely delightful.

The panini was ehhh.  Not enough sauce, too much arugula, kind of dry.  The pizza, on the other hand, OUT OF THIS WORLD.  Really, it was just so good.  It was gone way too soon, we even contemplated getting another one.  The flavors on both types of pizza mixed so well with each other and it was just like a flavor bomb in your mouth with each bite.  I’m kind of salivating right now thinking about it.  Our daughter loved it too! 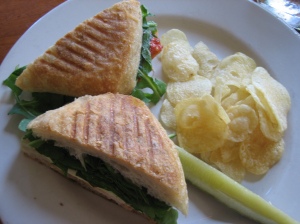 The bill was $32 before tip – which was completely reasonable for lunch.  Needless to say, we will be spreading the word and will be returning as soon as we can.

We ended on a sweet note, with a trip to Lick Ice Cream.  They serve Jane’s Ice Cream exclusively, which is based out of Kingston.  Everything is so delicious there, J went for the classic vanilla bean.  I got the coffee with cookie and a scoop of the lemon chiffon.  The ice cream is delicious, with really bright flavors, and the texture is so nice and creamy.  We had a great time enjoying our ice cream on a bench in front of the shop and watching our daughter roll around on the really clean sidewalks of Hudson.

I also need to mention that we got a parking ticket because we were wandering around Hudson so long looking for a restaurant.  But it was only for $6, a small price to pay for the memorable meal we had at Baba Louie’s.

2 thoughts on “Restaurant Hopping in Hudson”