On Monday, J, Future Foodie, and I went to the Side Street Café for lunch. It was very charming inside, with bright colors, and local paintings on the wall.  I ordered a burger with avocado, bacon, and aioli.  Wooheee, was that burger delicious!  It was tender, the bacon was crispy, the meat had flavor to it, the bun was nice and soft.  I devoured it.  J ordered a lobster roll (are you sensing a theme here?).  He thought the roll was divine, kind of what Thurston’s should have been.  It had a perfect blend of mayo, lobster, and spices.  We ordered macaroni and cheese with spinach for Future Foodie.  It was very impressive because the kid’s order was huge, it came out piping hot, and it was delicious.  We were definitely sneaking our bites in as well. 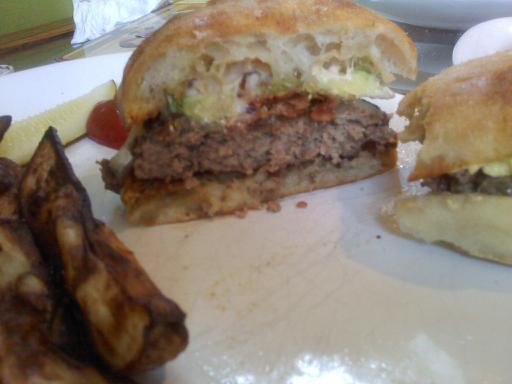 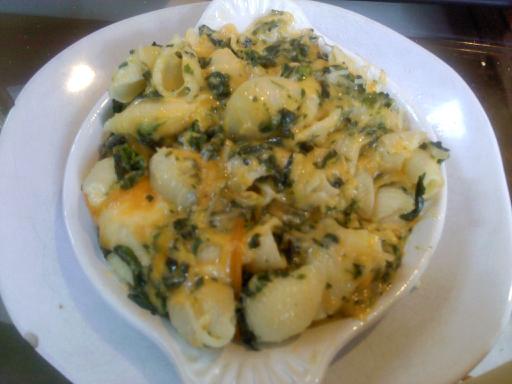 We stayed in for dinner again and J made crab cakes using Faidley’s recipe (a famous crab cake stand in Baltimore).  They also bought steamer clams, which J liked because he found them to be creamy, but our friends disliked them for the same reason.

On Tuesday, we stayed in Portland.  We made a beeline for Duckfat.  Let me just say this, BEST FRIES EVER!!! In Portland of all places! Who knew? I mean I’ve had fries in the birthplace of fries and I go and find the most delicious fries ever in Maine of all places.  They are fried in duck fat (duh) and are so crisp, and come out so hot, and stay hot (how, I’m not sure).  We got garlic aioli and truffle ketchup to dip the delicious sticks into. Yum.  We ended up getting three orders of fries, because we started with a small order of regular fries and we wanted to try the poutine (fries covered in melted cheese curds and gravy).  The poutine was pretty good but I preferred the naked fries.  Then after eating both of those, I decided we needed another order and proceeded to finish that one as well.  Reading that over now, kind of makes us seem like total gluttons. 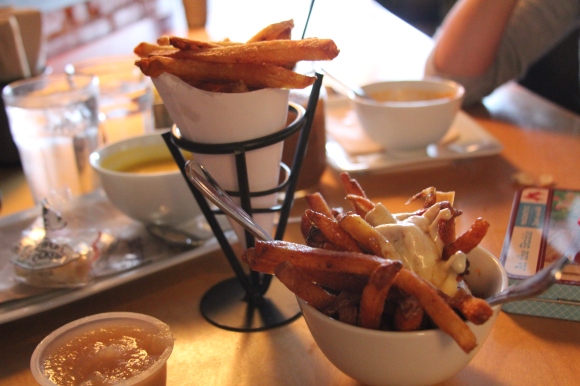 Lest you think all we eat are fries, we did order the carrot and ginger soup (for Future Foodie who wanted nothing to do with it) and I orderd the tomato fennel soup (creamy and delicious, with just a hint of fennel).  J ordered the ruben Panini made with beef tongue.  He thought it was good, but nothing to write home about because the tongue didn’t have that “tongue” texture which he likes.  We also got a strawberry milkshake, which was so damn good that Shake Shack should be ashamed of itself. 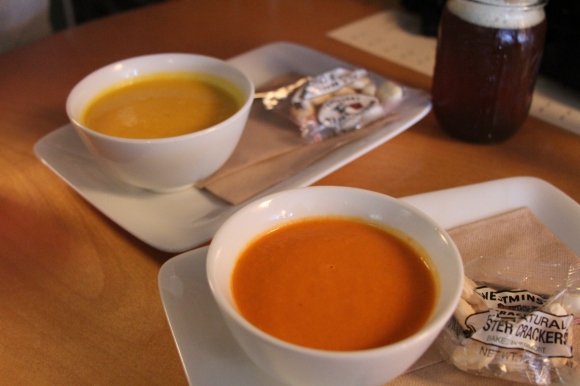 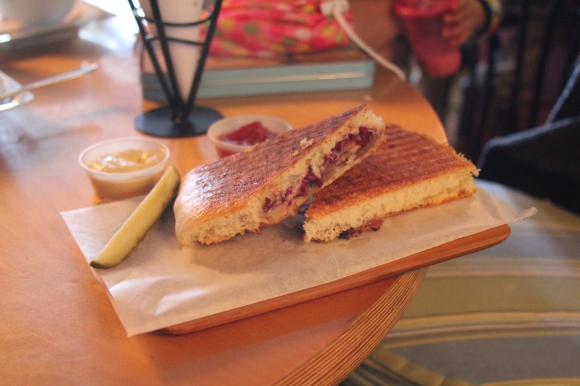 We actually did take out for dinner from the Dogfish café.  We were so tired and we really couln’t envision ourselves sitting down to another semi-stressful meal trying to entertain Future Foodie and eat at the same time.

We shared the Dogfish burger (8 oz, with an onion ring, bacon, tomato, mesclun mix, and bbq sauce). It was another mouthwatering burger.  You had to open your mouth very wide to take a bite but that bite had so much going on with it.  The tasty burger itself, the vegetables, and the crisp bacon and onion rings, and the spicy bbq sauce.  It was a delight. I also ordered a half rack of ribs, which got better the more I ate them.  I wish the meat was more tender, I really don’t like having to rip the meat off, I prefer it to fall off the bone by itself, but the bbq sauce was really tangy and spicy and kind of addictive.  I also enjoyed the cole slaw, it was wonderfully crispy with red and green cabbage and some carrots slices thrown in. 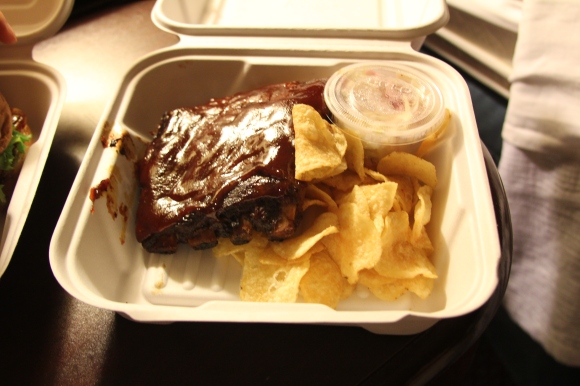 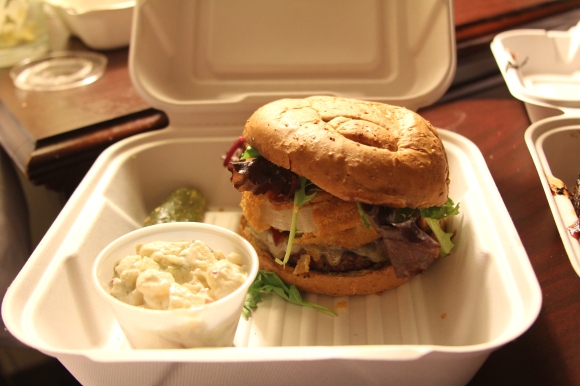 The next morning, we ambled over to Hot Suppa!, a local place devoted to fresh ingredients and local ingredients. 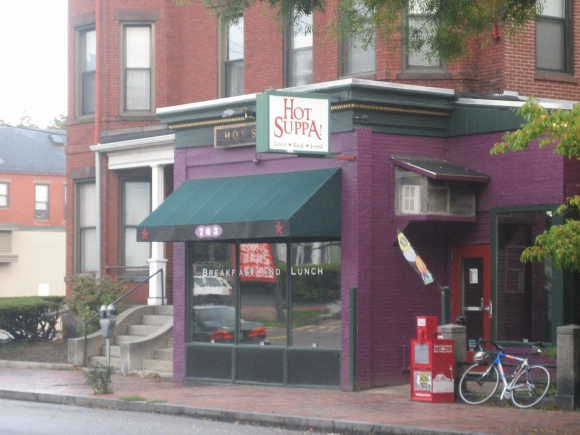 The restaurant itself had a nice, cool, hip vibe to it with a GIANT chalkboard with specials on it.  It was pretty quiet when we got there.  Our server, a young guy, was great, really friendly, welcoming towards Future Foodie, and most importantly, great at being a waiter.  J and I both ordered the corn beef hash as it’s highly lauded (even in national food magazines).  J, very smartly ordered a side of hash browns with it.  Future Foodie got a fruit plate. 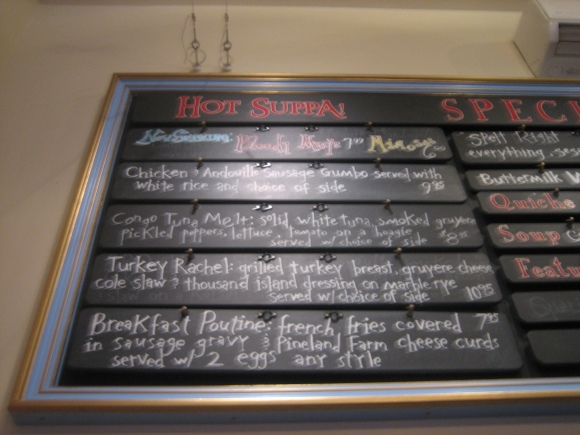 The food came out fairly quickly and J immediately declared it THE BEST CORN BEEF HASH EVER. I thought it was good, but it didn’t blow my socks off.  Here’s why I wasn’t so crazy about it and for the same reason, why J loved it.  It’s not a traditional hash, the corn beef is more shredded in bigger chunks, and there’s a very small amount of potatoes.  It was tender and tasty, but didn’t blow my mind. It also bugged me that it wasn’t hash like.  That’s what I like best about corned beef hash, the mushy quality of it.  I just felt like I eating big chunks of corned beef.  But J loved it and raved and raved.  Although I do have to say, his hash browns ROCKED.  They were so crispy and perfect. He mixed them into the corned beef.  So I caved and ordered some too.  The fruit plate for Future Foodie was great: sliced bananas, grapefruit, orange slices, strawberries, and grapes. She was loving it. 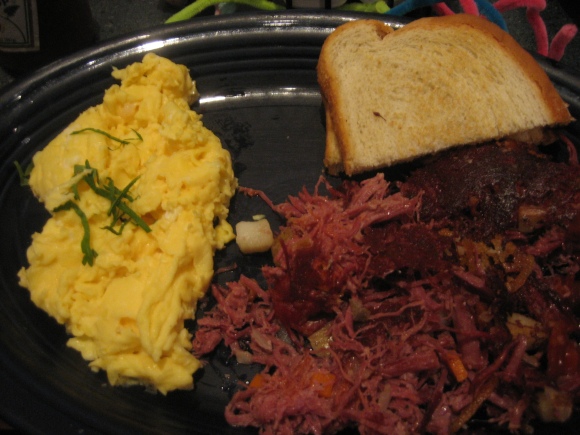 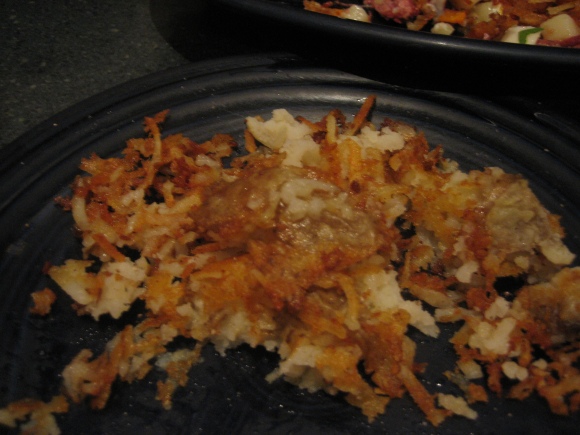 I am almost embarrassed to admit to this level of gluttony but J and I just had to have Dogfish burgers again. So we each had our OWN burger. I knew this time to order extra bbq sauce (I love my condiments).  J and I went to town on those burgers and finished the big things in like five minutes.  I’m getting misty eyed thinking about it because I know it’s going to be a while until I have it again.

That pretty much concluded our Maine trip.  As you can see, eating played a huge factor in the trip, as it always does.  We loved Maine. We want to retire in Maine.