Peter Luger Steakhouse, the biggest disappointment of my year

My little brother turned 21 on Saturday (yay!) and as a birthday present, our family took him out to Peter Luger’s for a steak (which has been a family tradition for a while now).

The evening didn’t start off too well.  We all ordered drinks at the bar, my brother was excited he was able to legally drink in front of other adults.  I ordered a dirty martini, and I kid you not, it tasted like I was drinking vodka with a cup of salt in it.  It was undrinkable. Now I’m no dirty martini expert but I’ve had one or twenty in my past and none of them were even close to as salty as this drink was.  I was being a weenie and didn’t feel like saying anything, so I made my mom do it.  She asked the bartender very, very nicely if he could make me another drink as the martini was way too salty.  Well, that just set him off. He started to literally have an adult tantrum in front of us, slamming glasses, throwing the drink out, exclaiming very loudly that he’s “made thousands of these with no complaints ever” and “it’s made with olive juice, didn’t we know that? That’s what makes it dirty” and apparently undrinkably salty.” My mom, bless her heart, was being so nice about it, while I literally wanted to take his big, ugly face and knock him down, but I kept all my seething inside.  He then says that we ordered it wrong, and that we should should have said to make it only a little dirty. So he finally he sets down his drink in front of me and I take a sip, still very salty but at least I could suck that stupid $12 drink down. 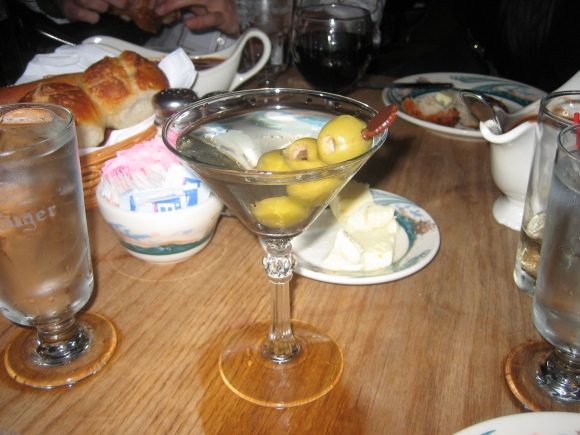 We finally sat down and the waiter was very nice. We ordered a steak for four, which was very pricey at $173 plus a $30 steak for one. We also ordered an appetizer of huge beefsteak tomatoes and french fries and creamed spinach for sides.

The tomatoes came out. They were predictably huge, but completely tasteless.  They looked like they were genetically modified and grown in a hothouse. You’re supposed to spoon the famous Peter Luger Steakhouse on it, which we did, which was okay tasting but still. It was $10 for some slices of bleh tomato.

The steak came out a little while later. It was huge and delicious looking.  Peter Luger is famous for its dry aged steak which is supposed to make it very tender. However, all six of us who ate that steak unaminously agreed that the steak didn’t taste like it had been dry aged for even an hour, and there was absolutely nothing special about it to warrant that huge price tag.  We probably could have had the same steak at Outback for a fraction of the price.  It was seriously disappointing.  As I said, it’s been a family tradition to go out to Peter Luger’s for a usually melt in your mouth tender steak.  We grew up going there. But this steak was nothing to write home about, instead it almost made me angry because the taste just did not match what we thought we were paying for. 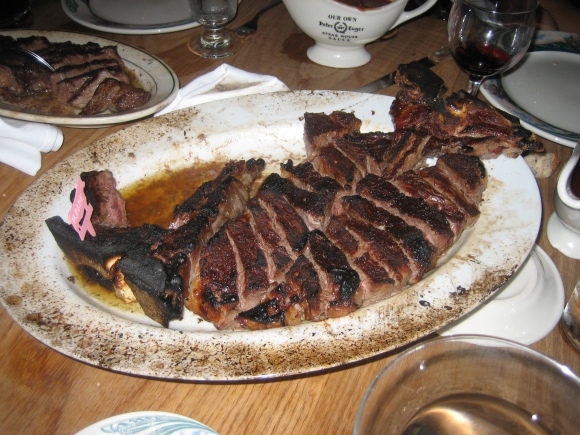 The creamed spinach and french fries were the highlights of the evening.  The spinach was very flavorful with a strong spinach flavor and no overpowering creaminess to it.  The french fries were big, crispy, and hot.  But still, those are items you can get anywhere.  We also got crappy, not crispy onion rings.  Just another disappointing thing to add to the list.

It makes me sad to write this post because I really used to love Peter Luger’s and would rave about it to anyone who would listen.  Now I will do the opposite and say that it does not live up to its hype.  All we got was an overpriced meal and rude service.  Needless to say, we will never go there again.

On Saturday, my family and I made our second trip in two weeks to Luso in Smithtown on Long Island. Side note, we decided to make our car our permanent residence.  It’s pretty cozy in there with the three of us and all of our luggage. We have food, a portable dvd player, music, and the company of each other, what more could we ask for?

So Luso is a Portuguese chartcuterie.   They bbq meat over wood briquettes and their signature dish is the bbq chicken.  This is the only reason to go to the restaurant.  Seriously, it’s cha-bang – out of of this world!  I’ve been there three times now, and have ventured to other areas on the menu and have been underwhelmed (my friend got fish and didn’t like how much butter they used, the sangria is overly sweet, and the kale/sausage soup is okay but J’s is better).  Whenever we go, we order the chicken for two for $18.95.  Sounds a little steep huh? But it’s really like the deal of the century, since along with that delicious grilled chicken, you also get as much salad as you want and tons of side dishes.  The salad is very good and very simple, just a mix of iceberg lettuce, sliced tomatoes, and white onions dressed with oil and vinegar.  It’s very European and with a little salt and pepper, it’s kind of addictive.

My sister literally ordered four plates of that salad; she was going a little nuts for the salad.  Then the chicken came out. They use a special marinade when grilling the chicken and the meat has so much flavor.  The skin is so crispy and good. It’s probably one of the best grilled chickens I have ever had (besides the grilled chicken we had out in Portugal).

The real kicker is when you put (or pour like J does) the Portuguese hot sauce, Piri-Piri sauce, on the chicken. We discovered the amazing Piri Piri sauce on a trip to Portugal a few years ago and have never forgotten it.  We even tried to recreate it but to no avail. The Portuguese use a special hot pepper that we couldn’t locate here.  Anyway, it gives a nick kick to the chicken and we literally clean the restaurant out of their Piri Piri whenever we eat there. 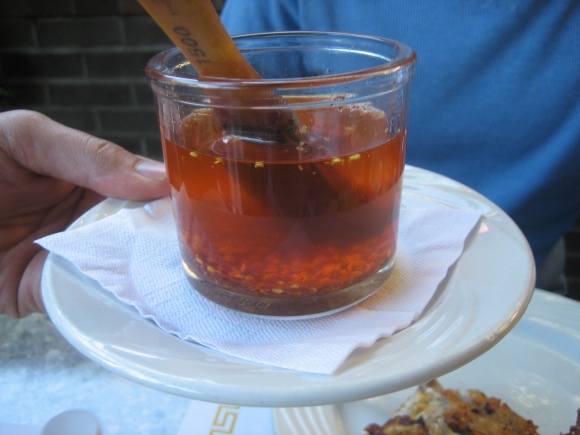 When you order the chicken, you also get a few very generously portioned sides:  rice, steamed vegetables, french fries, and home made potato chips. I mean, it’s a food fest all for less than $10 per person, AMAZING!

We all devoured the chicken and the rest of the food and let satiated and happy.  Service is efficient and the restaurant itself has a great outdoor back patio with huge outside heat lamps, and the inside is simple and cozy.  There’s always a ton of Portuguese people there which to me is a great sign.  If you’re ever on Long Island, check out Luso and get the chicken.  You won’t be disappointed.

So I’m one of those annoying morning people and more so now that Future Foodie wakes up at 6:30 AM on the dot every day.  This past Saturday, we were visiting family on Long Island.  It was 7 AM, my sister and I were up with Future Foodie and I decided that it would be just awesome if the whole family got up and went to breakfast at Maureen’s Kitchen in Smithtown.  So one by one, I woke my grumpy ass, the opposite of morning people up and told them we were having a family breakfast TOGETHER.  There was cajoling, demanding, and straight up yelling but I was absolutely determined we would get to Maureen’s Kitchen together and early.  That place fills up very, very quickly and I hate waiting for food, especially with a toddler.  So we collectively arrived at 8 AM and were promptly seated.

It’s super cute inside, there’s a big cow theme. Seriously, cows EVERYWHERE.  My parents took my sister and I took to Maureen’s kitchen when it was literally this tiny shack around 20 years ago and it’s been there ever since and has morphed into a bigger and nicer restaurant over the years.  The big thing at Maureen’s are specialty pancakes. I wasn’t feeling any of them so I got something I had never seen before, croissant french toast.  I mean yum, right?  Yum they were too!  Lightly dusted with powdered sugar, they were heavenly. They were not overpoweringly sweet, soft but not mushy.  I seriously ate my entire plate of food (sausages included), and a side order of the best corned beef hash I have ever eaten.  I was so happy. 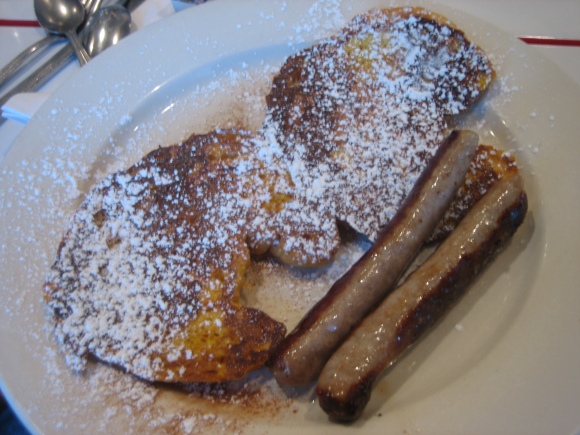 My mom got some awesome banana walnut pancakes.  They were delicious with walnuts baked right into the fluffy pancakes.  She took half of them home since she couldn’t match my voracious appetite and I finished them off the next morning.  I love leftovers!